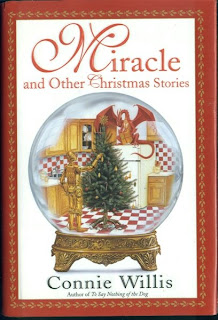 This book was recommended to me by T. I was a bit worried about trying it because I haven't been very fond of fantasy lately. However it had a Christmas theme and I decided to follow her advice and start it. It was the best thing I did because I really enjoyed it.
I had never heard of Connie Willis but after browsing the WWW I discovered she is very well known in the Sci Fi community.

This is an anthology including 8 stories with a Christmas theme. I must say I also really enjoyed reading the introduction in which the author tells us what she likes about Christmas, it's nearly everything!

MIRACLE
This was is actually a romantic story about how sometimes what you really want is right in front of you and it's not what you thought it was. There's much discussion about 2 christmas movies: Miracle on 34th Street and It's a Wonderful Life. I think I'll have to watch both and compare but according to Willis the first is the better one.

INN
This story has a time travel twist as Mary and Joseph get lost in the wrong century on the way to Bethlehem. It's a moving story as they are portrayed as a very young couple, not able to communicate, and lost in a foreign world.

IN COPPELIOUS'S TOY SHOP
This was one of the stories I liked less. The main character was really unpleasant and never changed during the course of the story. He is locked up in a toy story forever giving me the feel of a horror story but with no real closure.

THE PONY
Well not sure what to think of this one. Maybe if you secretly desire something for Christmas you will get it. I think I was left a bit in the air here and I really wanted to know what was in the package :-)

ADAPTATION
I liked this one and the Ghosts of Christmas having a bad time in the modern world. The main character is a divorced father whose plans to spend Christmas with is daughter are sabotaged at the last minute by his ex-wife.

CAT'S PAW
I love mysteries so this one was right up my alley as they say. I was a bit worried at first because of the monkeys behaving like humans, it seemed unnatural to me. But in the end it was a good story with an interesting final twist.

NEWSLETTER
Are people ruder and pushier at Christmas? Why does the sight of them being nice come as a susprise? Using the example of some Sci Fi movies it's the invasion of an alien species!
Whatever you do don't wear a hat! Unless you want to be nice that is :-)
This was a fun story to read as the main characters were attempting to decide wether to save the world from the aliens and make everyone rude again or if to just let it happen.

EPIPHANY
2 travellers have an epiphany and join forces with a third one on a journey of discovery.

I really liked Willis' writing, I think it was really interesting that she wrote all these stories with a common theme but they all feel so different from each other and really hold your attention.
She even leaves us with a gift. In the end she lists what she considers to be the best 12 Christmas reads and the best 12 Christmas movies!
I haven't read or seen the majority of them so I'll have to start looking for some available copies :-)
Highly recommended! Thanks T. :-)
Posted by Seccionista at Friday, December 29, 2006