What's On Your Nightstand?

It's that time of the month again, time for 5 Minutes For Books's meme What's On Your Nightstand! 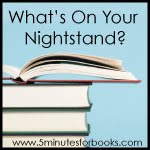 After being on a mysteries and thrillers mood for a while I have now changed to an historical fiction mood. This is a good thing because June is the month for the Anya Seton Season at HT and I fully intend to read some of her books and join the discussions there. At the moment I have several of her books in the TBR pile:

Amanda Lawrence, a charming, sheltered New York socialite, fell in love with Jonathan Dartland, a part-Apache mining engineer who belonged to the vastness of the Arizona desert. Amanda responded to his strength and self-reliance, but had nothing and nobody to guide her when she followed him to the grim town of Lodestone. . . .

Aaron Burr's daughter, Theodosia, was dedicated to him with single-mindedness. Better than anyone else in the world, she understood her father. It was to her he unburdened himself and in this reconstruction of Theodosia's life we see him clearly mirrored. Anya Seton treats the unusual relationship in a factual and open manner, sparing us the pedantry of psycho-history.

First published in 1958 and set in the early 17th century, this bestselling novel—and follow-up to Katherine—follows Elizabeth Winthrop, a courageous Puritan woman who finds herself at odds with her heritage and surroundings. A real historical figure, Elizabeth married into the family of Governor John Winthrop of the Massachusetts Bay Colony. In those times of hardship, famine, and Indian attacks, many believed that the only way to prosper was through the strong, bigoted, and theocratic government that John Winthrop favored. Defying the government and her family, Elizabeth befriends famous heretic Anne Hutchinson, challenges an army captain, and dares to love as her heart commanded. Through Elizabeth’s three marriages, struggles with her passionate beliefs, and countless rebellions, a powerful tale of fortitude, humiliation, and ultimate triumph shines through.
Posted by Vinagrinhos at Tuesday, May 25, 2010