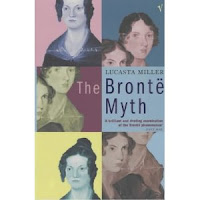 When I started the All About the Brontës Challenge I went to look for books about them, this one seemed intriguing and I couldn’t resist picking it up when I happened upon it.
The Brontë Myth is about what has been written through the years about the Brontë sisters and their work. Miller first discusses how they were seen by their contemporaries, how their work was received and the need they felt to hide themselves behind their pseudonyms of Currer, Acton and Ellis Bell. Considering how their work was received it is no wonder that Charlotte Brönte felt the need to maintain a certain reserve when dealing with others and that, after her sisters died, started to work on a story of their lives trying to protect them from an aggressive public opinion. Her relationship with Elizabeth Gaskell led the latter to write The Life of Charlotte Brönte. The first biography written about her would influence many of the future ones but is a somewhat romanticised version of her life, aiming to restore her reputation in the eyes of the Victorian society and attribute her "coarse" writings to a miserable childhood and the wildness of moors. Miller believes the truth to be very different but this idea, reproduced in many future books about the Brontës is the beginning of The Brontë Myth.
What Miller attempts to do is a study of all that body of work that has been produced over the years about the Brontë sisters, the different perspectives in different ages but also the different perspectives by different authors. Everything contributed to create an idea of them that is sometimes far from the truth although considered as such. She also refers some of the movie and series adaptations of the sisters’ work, some completely changed from the original story, and the Téchine adaptation of their lives.
I find it curious that one of the books I considered reading for the challenge was precisely the biography by Gaskell. I think every reader, or at least this reader, likes to read books about authors and their books and for that alone this The Brönte Myth is a really interesting read. Although it is a bit dry at times the information that provides was so interesting that I wanted to write down every book suggested and movie mentioned just to compare my opinion with Miller's. Some of them I will definitely track down and after reading this book I am curious about what the future will bring to add to the Brontë Myth.
Grade: 4/5
Posted by Vinagrinhos at Thursday, June 03, 2010